Puffed food has long been popular with many consumers because of its good palatability, unique taste, easy to carry, easy to eat, and long shelf life.

Fat, carbohydrates and protein are the main components of traditional puffed foods. From the component structure, it is a food with high fat, high calorie and low crude fiber. In addition, most of the traditional puffed foods contain more monosodium glutamate and salt and food additives. A large amount and long-term consumption will cause high oil and calorie intake, insufficient nutrient intake, and easily lead to obesity. With the gradual improvement of people's consumption awareness, food nutrition has become the main focus of consumer shopping. As a puffed food, the most important problem in the development of the industry at present is to solve the nutrition of products and change people's previous understanding of their “junk food”. 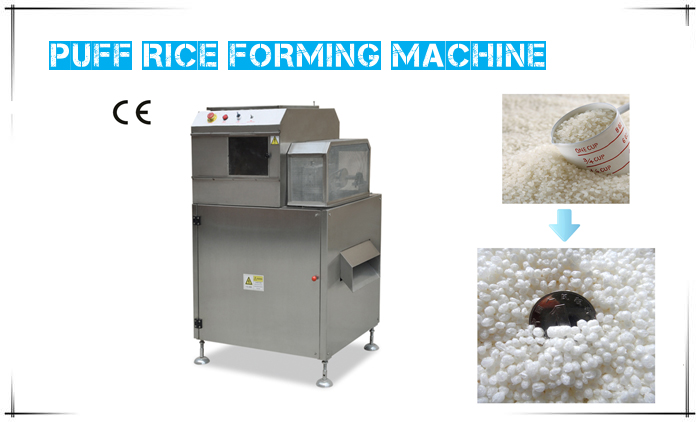 High-temperature puffing is the circulation of hot air to achieve the vaporization of water, and then the overall expansion of the animal material. There are currently cereal puffed foods produced using high temperature puffing technology, such as Puffed Rice Forming Machine.

Compared with the snack food made by frying, the high temperature puffing has low oil content, the product contains no oil or less oil, and is crisp and delicious. It has fast heating speed, short time, high product quality, uniform heating and equipment footprint. Fewer features. It can be foreseen that high temperature puffing technology is a direction for the development of puffed food production technology.

Cereal is the main food resource for human survival. The grain processing industry shoulders the heavy responsibility of providing humans with a basic dietary sources and ensuring human health. The world's grain processing industry is moving towards the use of modern high technology, increasing the development of limited grain resources and increasing the added value of cereal products.

At present, the application of puffing technology in China to produce puffed food is still in its infancy. Therefore, research on puffing theory and puffing technology should be actively carried out to continuously develop new products. It is believed that with the above-mentioned work and the improvement of people's living standards, the puffed foods that meet the needs of the public's life will surely develop rapidly.

Our company is Nuts Bar Forming Machine Manufacturer, welcome to come to us.

Next: Food Extruder Machine and barrel common faults and solutions