As a Macaroni Processing Line Manufacturer, share with you.

The world of pasta is like a kaleidoscope of ever-changing pasta. It is said that there are at least 500 kinds of varieties. With the combination of sauces, thousands of pasta dishes can be made.

The pasta named Pasta originally meant "kneaded dough." In Italy, spaghetti must be made with 100% high-quality wheat flour and boiled good-quality water, and no coloring and preservatives are allowed to be added whether it is made by hand or machine. In addition to the original noodles, other colorful noodles are made from a mixture of fruits and vegetables, such as saffron noodles, black cuttlefish noodles and egg yolk noodles. 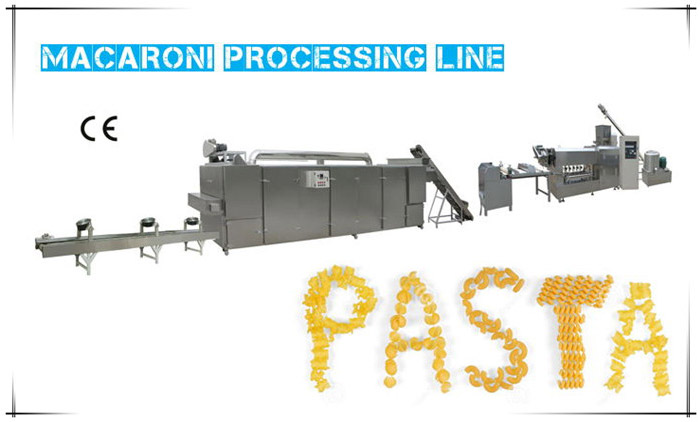 The shapes of pasta are all sorts of strange, thin round long noodles have the most common people Spaghetti, Angel Hair thin as noodles; flat types such as: spaghetti, flat thin noodles, wavy flat noodles and so on. Macaroni type: such as the onion tube surface and the inclined tube surface of the water pipe; the ear-shaped surface like a kitten's ear, the spiral surface like a screw; and the large and small bow-tie surface. Dumpling-shaped dumplings include square-shaped dumplings, ravioli-like capelacci dumplings, shell-shaped dumplings like flying saucers, and open-style dumplings with lasagna. The names of the noodles are as many as the appearance. More than 300 kinds.

The sauce of pasta can be basically divided into red sauce and white sauce. Red sauce is a red sauce based on tomato, and white sauce is a white sauce based on flour, milk and cream. In addition, it is also useful. Noodles seasoned with olive oil and herb sauce made with herbs. These sauces can also be combined with seafood, beef, vegetables, or simply combined with spices to change into a variety of different flavors.

Our company also has Macaroni Processing Line on sale, welcome to contact us.

Next: Are Corn Flakes good for Health?